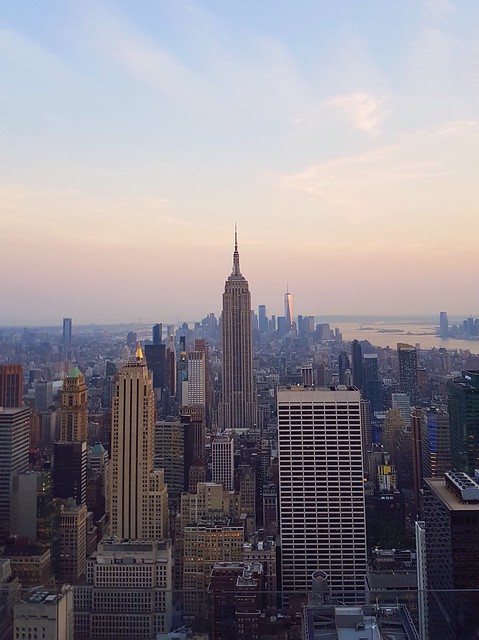 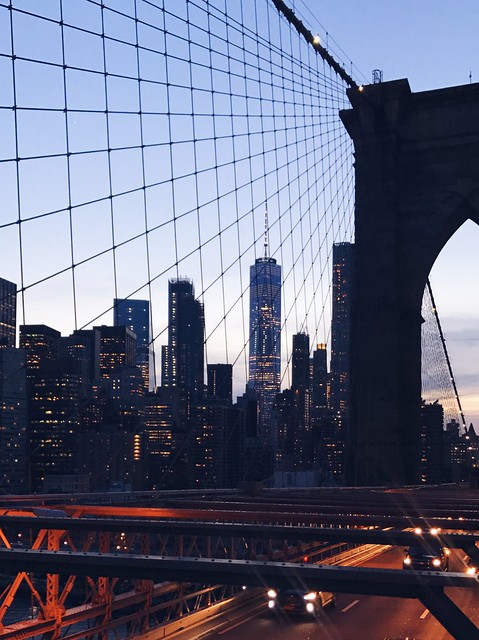 New York City… Big Apple, the city of dreams, the city that never sleeps, the place where dreams are coming true and home of iconic tv shows such as Gossip Girl, Sex and the City or Suits.
New York City is madness! There is no other place like NYC in this world. A concrete jungle where dreams are made of. A place where so many fashionable, hard-working and open-minded people are coming together. There is so much diversity, and moreover, there are so many amazing places to discover in the city that never sleeps!
Here are 12 incredible places to visit in New York City! 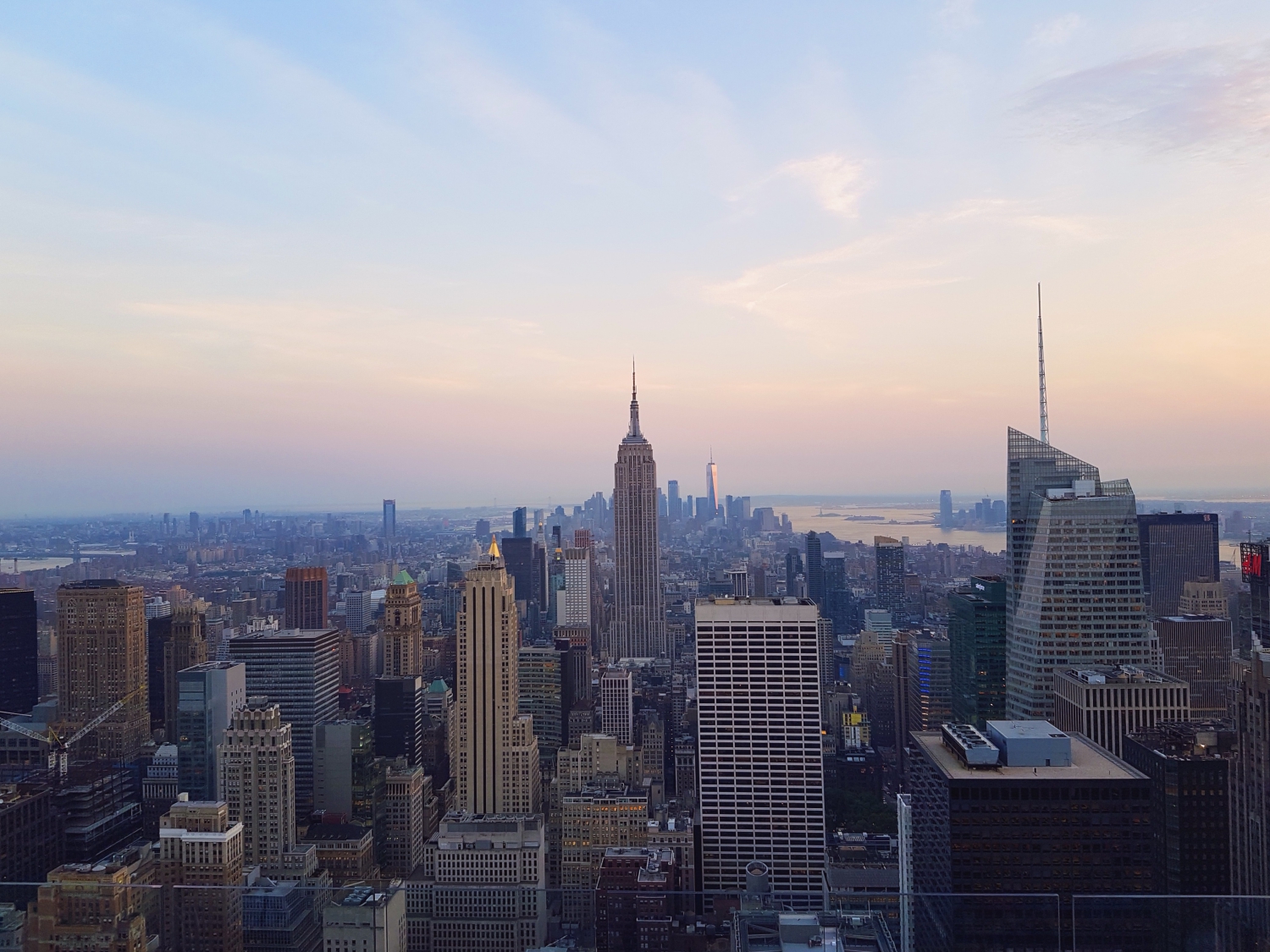 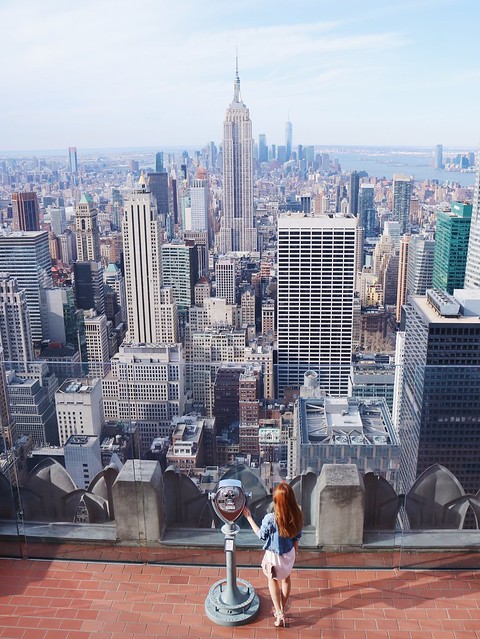 Of course, my all-time favourite view of the city has to be the first hot spot on my list. For me, the iconic Empire State Building is like the Eiffel Tower of Paris, and everyone who reads LY MADEMOISELLE for a while now knows how much I love it. Therefore, you can imagine how happy I was when I saw the Empire State Building for the first time in real life when I came to NYC.

For getting a gorgeous view over the city where dreams are coming true, you can get up on top of the building. Even though Chuck Bass wanted to propose to Blair Waldorf here at this spot, I actually never made it up there. Furthermore, I recommend the Top of the Rock on the Rockefeller Center more. From the Top of the Rock, you can also see the Empire State Building, which is obviously not possible if you are on top of it. Even though the tickets are pricey (about $ 40) the stunning view is definitely worth it! Try to go up there during sunset and then stay until it is getting dark. Due to that, you can see the Manhattan’s skyline during day and night. 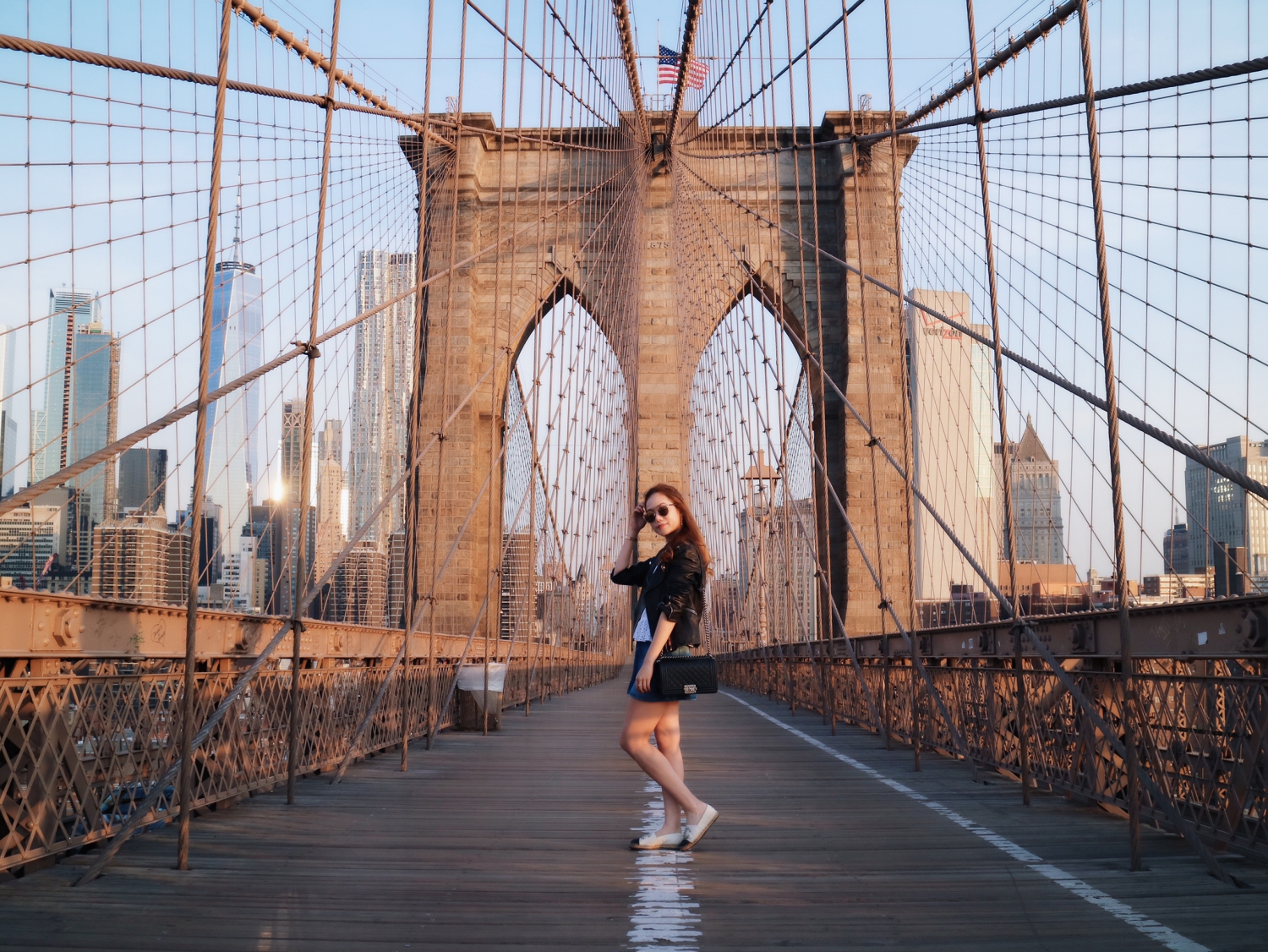 Another very famous NYC sightseeing spot is the Brooklyn Bridge, which leads you from Manhattan to Brooklyn over the East River. It was one of the first suspension bridges in the world and was finished in 1883. Take a stroll over this iconic bridge, and get a breathtaking view of New York City from the deck. If you are a sunrise and sunset lover, then take a romantic stroll over the bridge during those times of the day.

One of the most well-known symbols for the United States and New York is the Statue of Liberty, which stands as an icon for America’s freedom and independence.
There is a free Staten Island ferry, which is the best way to see Miss Liberty, and it is even for free! (Yes, in NYC you will be happy about everything that is not pricey, because hell yes, the city is unbelievable expensive!). Additionally, you will also get a view of Lower Manhattan with the Staten Island ferry. 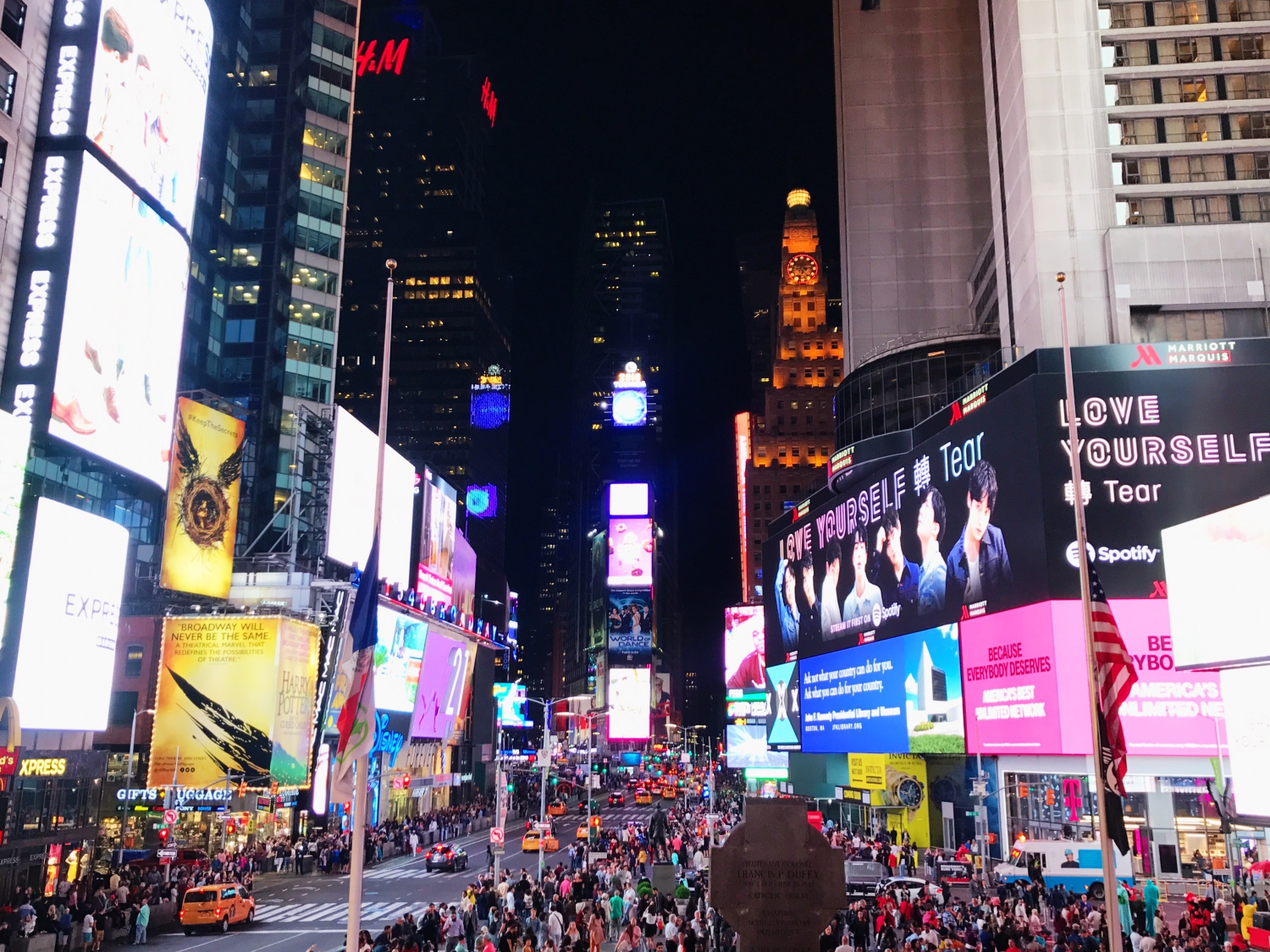 Iconic heart and soul of entertainment in New York City. There is that unbelievable energy that runs through your body while standing in the middle of the big city lights and people. Hectic, definitely crowded as hell, noisy and merely a chaotic bunch of everything. This is a place you have to visit at least once in life!
Around Times Square you will also find the Broadway, and there is nothing quite like seeing a show on Broadway. I love musicals since I am little and because of this having the experience of watching a musical here is priceless for me. My friend and I, we decided to go to see Disney’s Aladdin, which was beyond beautiful. But I can also recommend you “Wicked – the witches from OZ”, “The Lion King” or “Mamma Mia”. 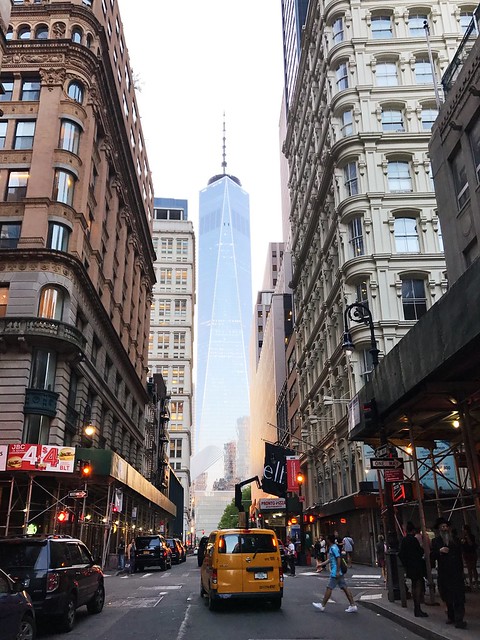 The tallest building in New York City nowadays is the One World Trade Center, which is located downtown in the financial district. On top of the building is the One World Observatory, where you can have a view over Manhattan and also of the Statue of Liberty.
Next, to the One World Trade Center is the 9/11 memorial and also the museum. I did not take any photos of those places, due to the reason that it is such a matter of respect. But you should still definitely go and see it when you are visiting NYC.
If you are thinking about visiting the museum, in my opinion, the museum is a little bit intense, but on the other hand, you can also see how people are standing together and supporting each other in hard times. This was really touching to see that point as well. 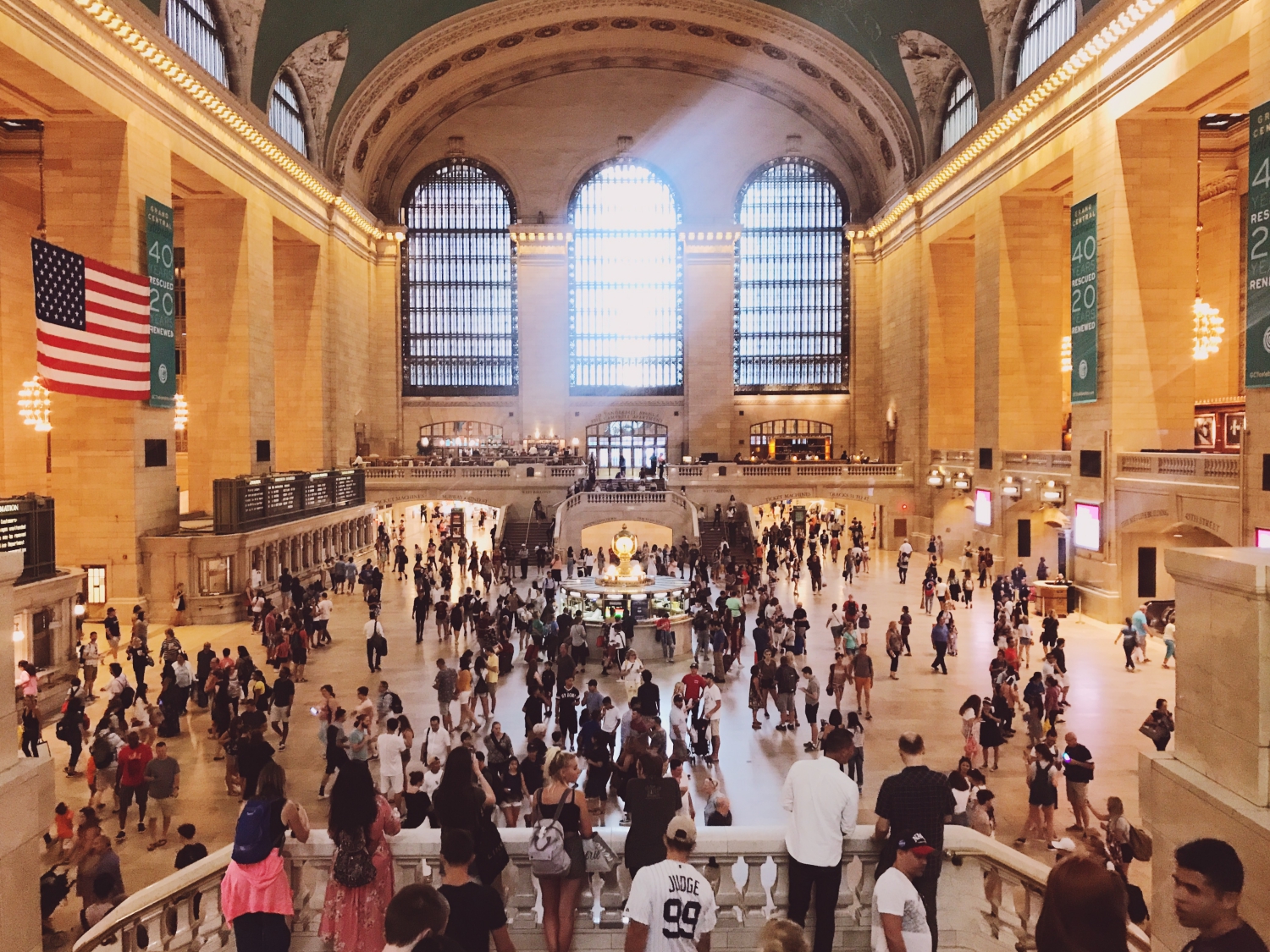 “Spotted at Grand Central, bags in hand: Serena Van der Woodsen”, was the famous opening line from the tv show Gossip Girl.
The hustle and bustle of New York City come alive here at Grand Central. There is no other train station like this one. The architecture is so beautiful, and it is one of the most exquisite train stations I have ever seen.
Downstairs, you will find a Shake Shack and a Magnolia Bakery counter, which is less crowded than the main places!

What is a visit to New York City without a little bit of shopping? On the Fifth Avenue, you will find everything from fast fashion to luxury fashion!
Whether it is the famous Tiffany & Co. store from “Breakfast at Tiffany’s”, the department stores such as Bergdorf Goodman and Saks Fifth Avenue or the unique Apple cube. All those particular spots are located on the Fifth Avenue, but you will also, of course, find American brands such as Victoria’s Secret or Abercrombie & Fitch there. 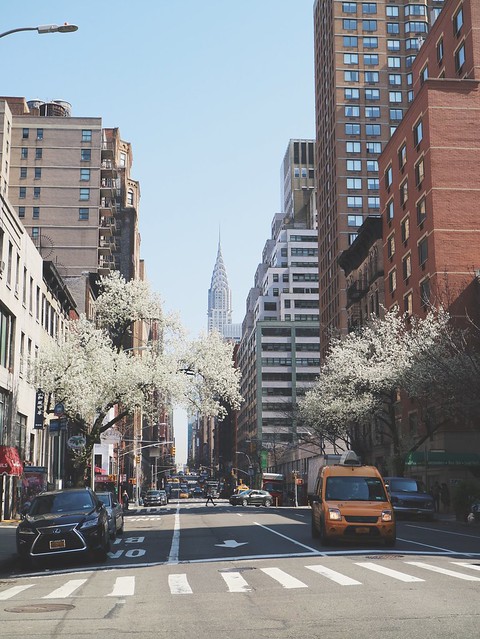 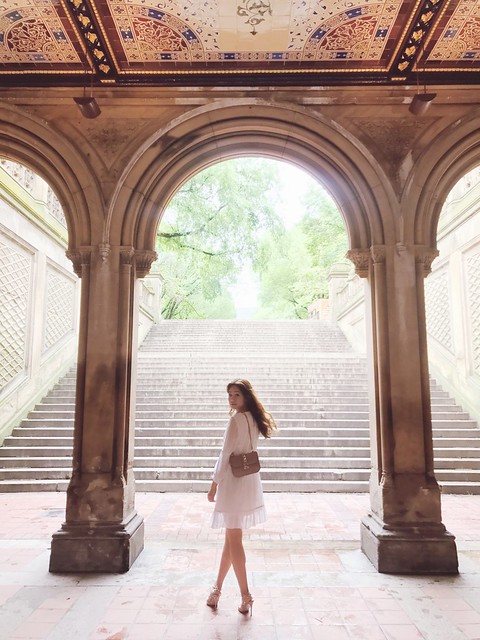 While on the one hand, it can be fascinating to be in a fast-paced city such as New York City, it can also get very exhausting pretty quickly on the other side. Thankfully, there is a vast green oasis in the middle of the city, which is also known as the Central Park. Therefore, if you need a break and just want to relax a little bit, go and stroll through Central Park. Have a picknick there or take a boat ride. Go for a run, lie down on the grass and don’t miss out on the chance to go to the ice skating rink, when you visit NYC during winter. 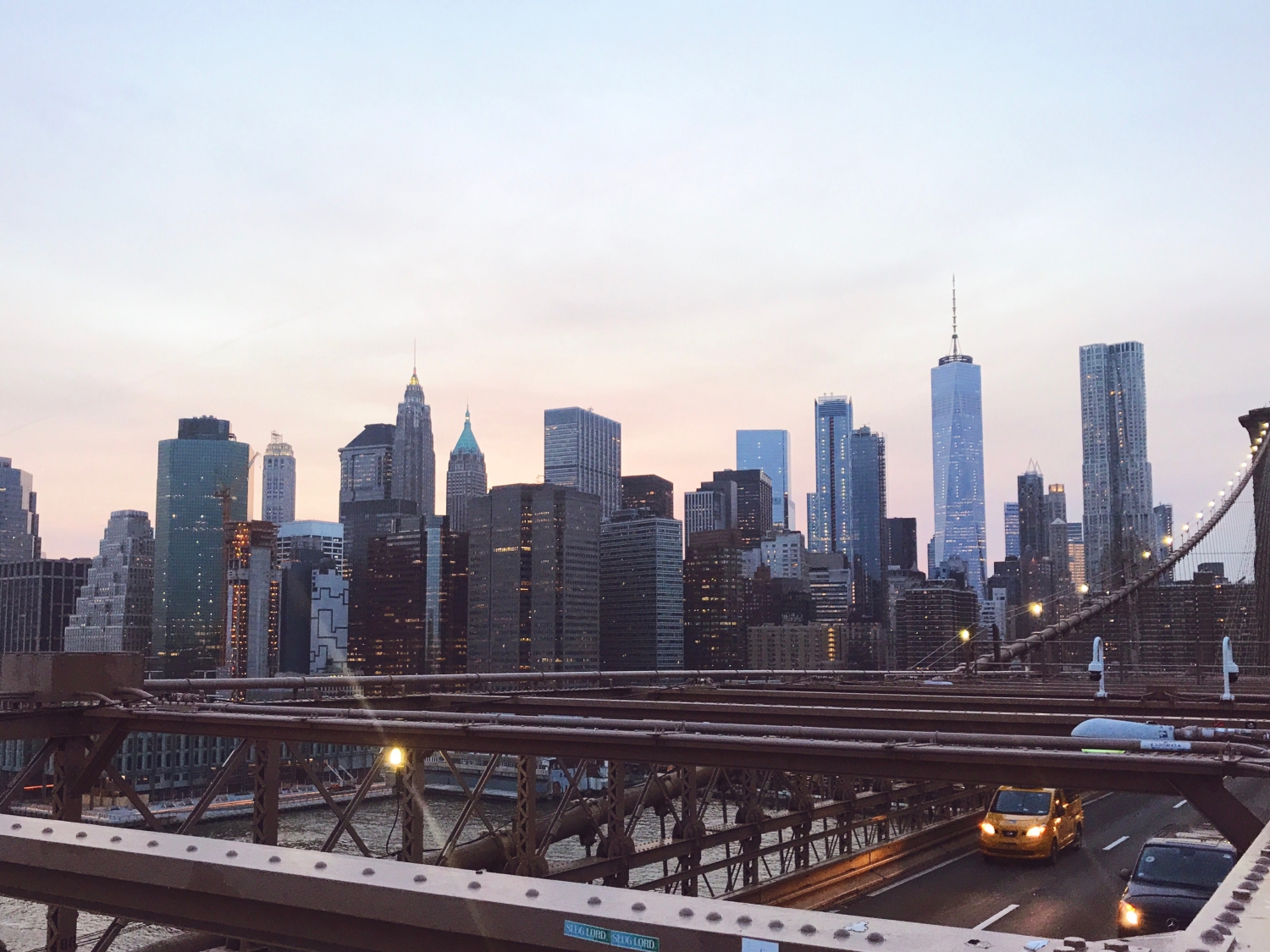 One of the aspects, which I love the most about NYC, is that you do not need to go far away if you want to feel being somewhere else.
Head downtown to Little Italy if you want to have an Italian summer holiday full of pizza and pasta feeling.
Right next to Little Italy you can find China Town, with delicious Asian restaurants and colourful buildings. China Town was one of my favourite districts, because first of all, it isn’t so pricey like the rest of Manhattan. Secondly, whenever I missed my parent’s food, I could find those meals in China Town as well.
(By the way: for the best skincare, beauty treatments, BBQs and endless Karaoke nights, go and visit Korea Town! I loved that district as well, and I was literally strolling around there every week! 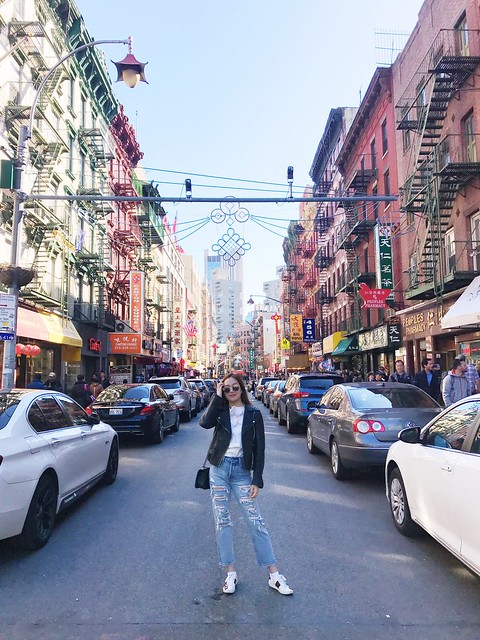 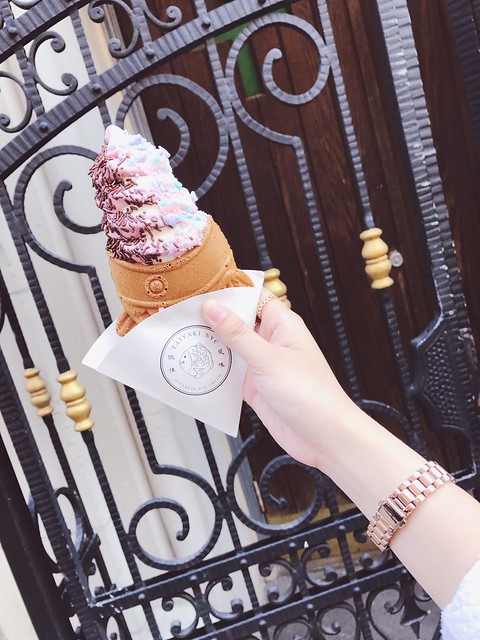 A converted overground railway that runs through Manhattan. Living right next to it, I used the High Line pretty often when I was walking around in the city. This is a great way to see the city from a different perspective. On the other side of the view, you could see the Hudson River, which is a lovely and calming view as well.
Besides, walking on the High Line gives you the feeling, that you would walk through a garden that runs from Meatpacking district up to the 34th street.

Well, since I am in the finance branch, I couldn’t let out this place in New York City. Also, I think it is exciting to see the location of “Wolf of the Wall Street” in real life, where billions of dollars are traded each day. (Unfortunately, I didn’t bump into Leo, lol!) Even though nowadays every transaction is made by computers, the trading floor is still open.
In the financial district, you will also find the Charging Bull, which is a significant monument of the city and a well-known symbol in the finance world as well. 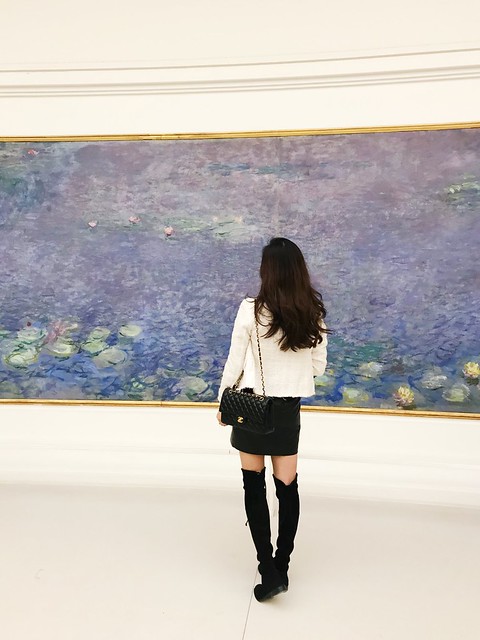 For all the art lovers of you, there are plenty of museums to visit in New York City. The famous MET museum (The Metropolitan of Arts), MOMA (Museum of Modern Arts) or the Natural History Museum are a few for example.
I really enjoyed the MOMA museum because they have the panorama painting “Water Lilies” from my favourite artist; Claude Monet. Another lovely art piece in the MOMA museum is Vincent Van Gogh’s “The Starry Night”. But if you want to enjoy this painting, then visit the museum either very early or very late, because it is quite famous with tourists and it is always super crowded in front of it. 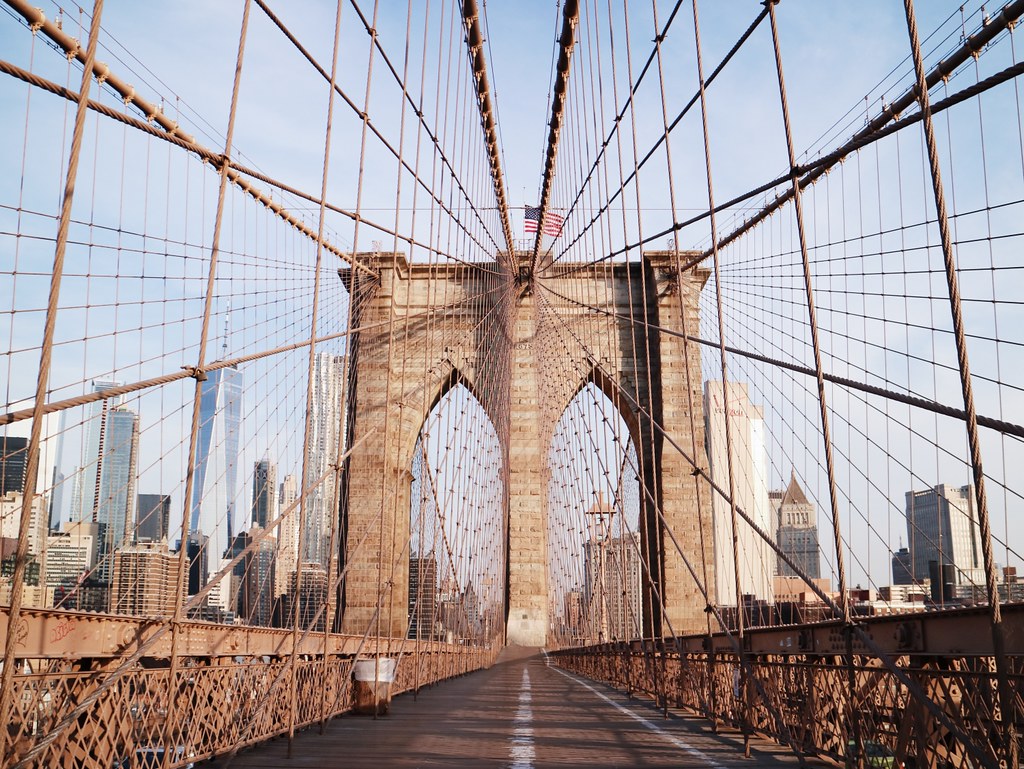 | Copyright © 2017-2020 Ly Mademoiselle. All Rights Reserved.
We use cookies to ensure that we give you the best experience on our website. If you continue to use this site we will assume that you are happy with it.OK